In Britain, the civic office of Mayor brings with it over 800 years of tradition and loyalty to the Crown, and a direct link to the monarch through parliament.

The current position of Barnet Mayor was created in 1965 when the two borough councils of Finchley and Hendon were amalgamated with three urban district councils to form the London Borough of Barnet.

The Mayor is elected each year by fellow councillors and is the first citizen of the borough, only the Queen (or her representative, the Lord Lieutenant of Greater London) takes precedence.

As part of his or her duties, the Mayor has to sign, and witness the sealing of, all legal documents from the council.

Mayor’s Regalia and the Mace

The Mayor’s robe is scarlet and centuries ago rich colours such as this would have indicated great wealth and status as they were very expensive to produce.

The robe is worn with a white lace collar called a ‘jabot’, and a black ‘cocked’ hat (or three-pointed ‘tricorn’ for the ladies) which is trimmed with gold braid.

The Deputy Mayor’s robe is maroon and his or her hat has silver braid. Councillors also have robes - they are black in colour with a black trimmed hat.

Mauve robes and black tricorn hats are worn by the mace bearers. The Chief Executive of the Council has a style of robe that dates back to the town clerks of the 17th century and includes the traditional wig and bands.

The mace began life as a weapon! It was originally an iron rod with a chain and a heavy iron ball or spike on the end.

It was carried by the Sergeant-at-Arms of the then ruling King or Queen, who became what we know today as a mace bearer. The mace would have been carried in front of a royal person for protection, and nobody was ever allowed to come between the monarch and the mace.

That tradition still remains today - no-one must come between the mace and the Mayor. Years ago, among other things, the Mayor was a tax collector and so the mace became a handy weapon of defence! At ceremonial occasions, the mace bearers carry the two maces of Barnet - one from Hendon and the other from Finchley.

Both these towns were granted royal charters in the 1930s. Each silver mace bears a history of the area they come from.

The Mayor's badge is an important piece of civic regalia as it forms part of the mayoral chain.

No legal document is considered legal until it has been ‘sealed’, or stamped, with the borough crest and signed by the Mayor.

In days gone by what better place to keep the important seal safe than around the Mayor’s neck? Hence why a replica of the borough’s crest, 'the badge', became a symbol of the mayoralty along with the Chain of Office.

Today, the seal is stored in a safe but is still used to seal all legal documents on a weekly basis.

The Mayor’s chain was presented to the borough of Barnet in 1965 by the union NALGO - now known as UNISON. The white and yellow gold chain shows the Barnet crest and accompanies the Mayor on all official events. 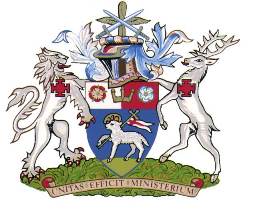 Barnet’s Coat of Arms, as shown on the Mayor’s Badge, is used on all mayoral correspondence and may be seen on signs around the borough - as well as being emblazoned on the flag on the mayoral car. The Grant of Arms was given to the borough on 1 January 1965.