Agent Jack tells the astonishing true story of how, during World War II, MI5 fooled dozens of British fascists into thinking they were spying for Germany.  The story has inspired two novels: Kate Atkinson’s Transcription and Anthony Quinn’s Our Friends in Berlin. But the truth is as remarkable as any work of fiction.

In 1942, MI5 faced a puzzle. They’d spent the first three years of World War II convinced that Germany had a “fifth column” of British traitors, ready to rise up and assist in an invasion. But the spy-hunters hadn’t been able to find any trace of such an organisation. What they had kept finding was people who wanted to join it. So, MI5 decided they might as well set the group up themselves. For the next three years, a small team within the Security Service patiently collected British Nazi sympathisers, keeping them busy but out of harm’s way. The team was made up of Victor Rothschild, peer of the realm, scientist and bomb-defuser; his “assistant” Theresa Clay, a famous biologist with a complicated personal life; and the star of the operation, Eric Roberts.

Roberts was apparently an ordinary clerk, commuting in every day to the Euston Road branch of the Westminster Bank. But he had another life, in which his astonishing skill as a secret agent was revealed.  As the war progressed, these three catalogued hundreds of British people who were willing to risk the noose to help Germany. But when peace came in 1945, MI5 faced a new problem: what to do with them all?

Robert Hutton writes about politics for Bloomberg, and about spies for fun. His first two books were about how language is used by journalists and politicians to bend the truth.

The talk will last around 45mins, followed by a ten-minute Q&A session, with a mystery prize for the best question. 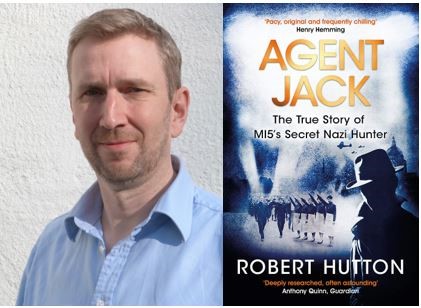