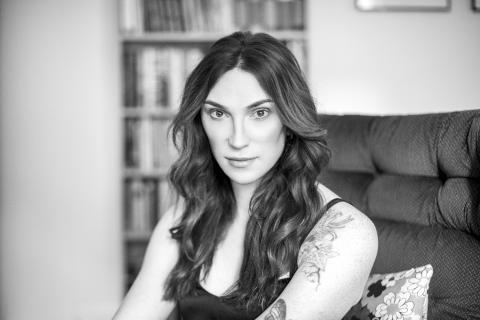 Juno Dawson is a bestselling novelist, screenwriter, journalist, and a columnist for Attitude Magazine. Her writing has appeared in Glamour, The Pool, Dazed and the Guardian. She has appeared on Pointless Celebrities, BBC Women’s Hour, Front Row, ITV News, Channel 5 News, This Morning and Newsnight.

Juno’s books include the global bestsellers, THIS BOOK IS GAY and CLEAN. She won the 2020 YA Book Prize for MEAT MARKET. She also writes for television and has multiple shows in development both in the UK and US. An occasional actress and model, Juno had a cameo in the BBC’s I MAY DESTROY YOU (2020) and was the face of Jecca Cosmetics Play Pots campaign.

Juno grew up in West Yorkshire, writing imaginary episodes of Doctor Who. She later turned her talent to journalism, interviewing luminaries such as Steps and Atomic Kitten, before writing a weekly serial in a Brighton newspaper.

Juno lives in Brighton. She is a part of the queer cabaret collective known as CLUB SILENCIO. In 2014, Juno became a School Role Model for the charity STONEWALL.

Discover what it means to be a young transgender or non-binary person in the 21st century in this frank and funny guide for teens, from the author of 'This Book is Gay'.

When three very different siblings, Fern, Rowan and Willow, go home for a Christmas reunion at their family home in Edinburgh, it's not long before some very big secrets threaten their cosy holiday. The McAllister house on Arboretum Road has seen 120 Christmases since its completion. This year, Fern is bringing her gorgeous boyfriend home and she wants everything to be perfect. But her twin brother Rowan would rather go on the pull than pull crackers with the family. And their younger sister Willow is terrified of Christmas Day. With four sleeps till Christmas, three secretive siblings, two hot houseguests, and one juicy secret - this Christmas, there will be some big surprises under the tree.

Alice lives in a world of stifling privilege and luxury - but none of it means anything when your own head plays tricks on your reality. When her troubled friend Bunny goes missing, Alice becomes obsessed with finding her. On the trail of her last movements, Alice discovers a mysterious invitation to 'Wonderland': the party to end all parties - three days of hedonistic excess to which only the elite are welcome. Will she find Bunny there? Or is this really a case of finding herself? Because Alice has secrets of her own, and ruthless socialite queen Paisley Hart is determined to uncover them, whatever it takes. Alice is all alone, miles from home and without her essential medication. She can trust no-one, least of all herself, and now she has a new enemy who wants her head.

Jana Novak's history sounds like a classic model cliche: tall and gangly, she's uncomfortable with her androgynous looks until she's unexpectedly scouted and catapulted to superstardom. But the fashion industry is as grimy as it is glamorous. And there are unexpected predators at every turn. Jana is an ordinary girl from a south London estate, lifted to unimaginable heights. But the further you rise, the more devastating your fall.

Meet the patients of the Clarity Centre: Kendall, the trans anorexic model-wannabe, vicodin addict Saif, OCD hoarder Guy, over-eater Ruby, washed-up reality TV survivor Brady, and last but definitely not least, spoiled heiress Lexi Volkov. Lexi hit rock bottom. After almost overdosing in a penthouse suite her brother stages an intervention and takes her to the Clarity facility for troubled young people. After a gruelling and painful detox, Lexi enters group therapy and meets her fellow 'inmates'. Through her therapy sessions and a ten-step programme, Lexi gradually opens up about her destructive life. 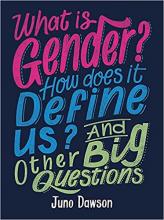 What's the difference between sex and gender? What does it mean to be defined by your gender? Are there only two genders? This informative book helps kids to explore these questions and more, explaining that there are differences of opinion and that answers are not always straightforward.

What makes a woman a woman? Is it her biology? Is it a rite of passage? Is it society? Is it all a performance? As she transitions from male to female, and her body gets in line with her mind, Juno Dawson explores feminism and femininity in science, society, the media and culture. Part memoir, party diary of her transition, Juno's wry, humorous take on her life and the world is funny, fresh and unflinching.

Sometimes love has to cross all kinds of barriers. Fliss is on the way to visit her grandmother in Wales - the grandmother who she doesn't get on with - with her mother who is recuperating from chemotherapy. But her mum is getting better, that's the main thing, so Fliss can concentrate on being grouchy and not looking forward to meeting her grandmother Margot, who is so cold and always so unforgiving of Fliss's every mistake. But when the six months is up, Fliss consoles herself, she and her mum will go back to London and back to real life! In the meantime, Fliss needs to get used to her new school, not upset the scary girls, and just keep her head down. Then Fliss discovers a diary at the back of her bookcase. It is from the 1940s and is set in World War II, and, Fliss realises, is actually Margot's diary from when she was a young woman during the Blitz.

We all have a mind, so we all need to take care of our mental health as much as we need to take care of our physical health. And the first step is being able to talk about our mental health. Juno Dawson leads the way with this frank, factual and funny book, with added information and support from clinical psychologist Dr Olivia Hewitt. Covering topics from anxiety and depression to addiction, self-harm and personality disorders, Juno and Olivia talk clearly and supportively about a range of issues facing young people's mental health - whether fleeting or long-term - and how to manage them, with real-life stories from young people around the world.

When 16-year-old Toria Bland arrives at her new school she needs to work out who her friends are, all in a crazy whirl of worry, exam pressure and anxiety over fitting in. Things start looking up when Toria meets the funny and foul-mouthed Polly, who's the coolest girl Toria has ever seen. Polly and the rest of the 'alternative' kids take Toria under their wing. And that's when she meets the irresistible Nico Mancini, lead singer of a local band - and it's instalove at first sight! Toria likes Nico, Nico likes Toria but then there's Polly.

Seventeen-year-old Sally Feather is not exactly a rebel. Her super-conservative parents and her treatment at the hands of high school bullies means that Sally's about as shy and retiring as they come - but all that's about to change. Accidentally ending up in the seedier side of town one day, Sally finds herself mysteriously lured to an almost-hidden tattoo parlour - and once inside, Sally is quickly seduced by its charming owner, Rosita, and her talk of how having a secret tattoo can be as empowering as it is thrilling. Almost before she knows what she is doing, Sally selects sexy pin-up Molly Sue, and has her tattooed on her back - hoping that Molly Sue will inspire her to be as confident and popular as she is in her dreams. But things quickly take a nightmarish turn. Almost immediately, Sally begins to hear voices in her head - or rather, one voice in particular, Molly Sue's.

Former PSHCE teacher and acclaimed YA author Juno Dawson gives an uncensored look at sexual orientation and gender identity. Including testimonials from people across the gender and sexual spectrums, this frank, funny, fully inclusive book explores everything anyone who ever dared to wonder wants to know - from sex to politics, how to pull, stereotypes, how to come-out and more.

Roberta 'Bobbie' Rowe is not the kind of person who believes in ghosts. A Halloween dare at her ridiculously spooky boarding school is no big deal, especially when her best friend Naya and cute local boy Caine agree to join in too. They are ordered to summon the legendary ghost of Bloody Mary: say her name five times in front of a candlelit mirror, and she shall appear. But, surprise surprise, nothing happens. Or does it?

Lis London is hoping for a fresh start when she arrives in the sleepy village of Hollow Pike - but nothing here is as it seems. Lis has a recurring nightmare where someone is trying to kill her. A ritual murder in the woods - just like her dream - makes Lis think she might be next to die.