Councillor Alison Cornelius has become the 56th Mayor of Barnet after being officially sworn in during the Annual Council Meeting held on 25 May. 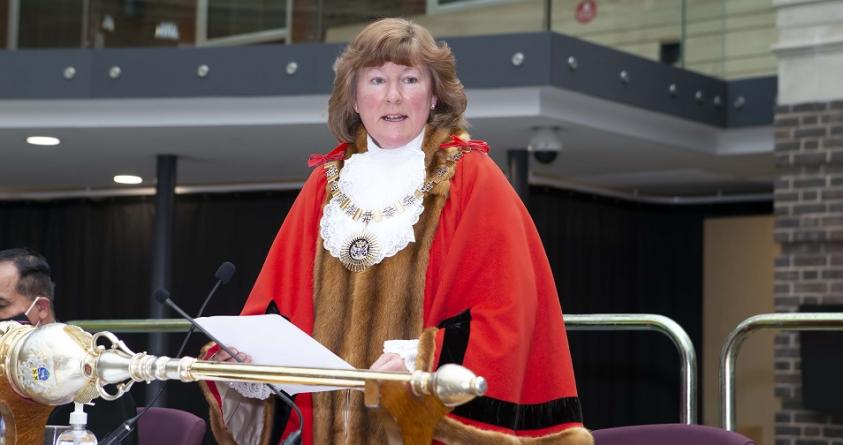 During her mayoral year Councillor Cornelius’s husband, former Leader of Barnet Council Councillor Richard Cornelius, will be the Mayor’s Escort and Councillor Cllr Saira Don will be her Deputy Mayor.

Councillor Cornelius took over from the Borough’s previous Mayor, Councillor Caroline Stock. Councillor Stock served for two consecutive years as Mayor due to the pandemic and the sad passing of Councillor Brian Gordon, who was due to take over as Mayor in September last year.

Councillor Cornelius grew up in Buckinghamshire and moved to Barnet following her marriage over 40 years ago and has lived in Totteridge with her family ever since.

She worked for TV companies including the BBC before running her own business. She joined Barnet Hospital’s Chaplaincy Team in 1998, visiting sick children and their families in the Children’s Ward for 17 years. She was also a Governor at St John’s School, Whetstone, for 10 years.

Councillor Cornelius was elected to Barnet Council in 2009 as a Councillor for Totteridge Ward and is currently Chairman of the Health Committee. She also sits on the Totteridge Residents’ Association Committee and is a member of St Andrew’s Church, Totteridge, Parochial Church Council. She was Deputy Mayor in the municipal year 2015-2016.

Councillor Cornelius is currently Vice Chairman of Eleanor Palmer Trust, a charity based in High Barnet with a 33-bed Care Home and 78 Sheltered Housing Units.

The Worshipful the Mayor of Barnet, Councillor Alison Cornelius, said: “This is a tremendously proud moment for me. I have lived in the borough for many years and it is a real privilege to be appointed as the Mayor of Barnet for the coming year. Barnet is a fantastic place in which to live and I am thoroughly looking forward to meeting many of its wonderful residents during what I hope will be a busy mayoral year.  May I take this opportunity of thanking Councillor Caroline Stock for her hard work and dedication to the borough over the past two years: she has been an exceptional Mayor and will be a very hard act to follow.”