Saturday 27 June will mark the culmination of the week leading up to Armed Forces Day 2020 as the country acknowledges the significant contribution made by those serving in the military. 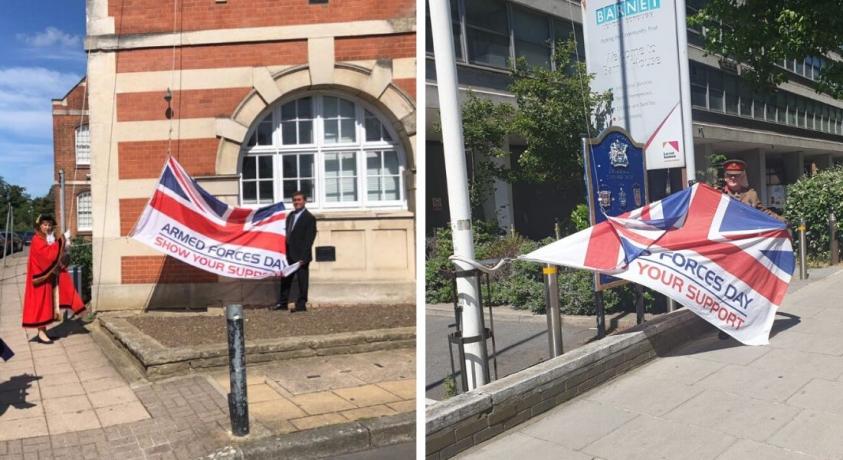 Barnet was due to mark the occasion with a ceremony held at the RAF Museum, Hendon, but the current situation has led to the event being cancelled.

It was to have been attended by the Worshipful the Mayor of Barnet, Councillor Caroline Stock, as well as army reservists, cadets, ex-servicemen and women, and was to have concluded with a fly-past by a Lancaster bomber from the RAF’s Battle of Britain Memorial Flight.

Although this year’s ceremony has been cancelled, Armed Forces Day flags have been raised above Hendon Town Hall by the Mayor, and outside council offices at Barnet House by Deputy Lieutenant Martin Russell.

The Mayor of Barnet said: “It is a great shame that we have not been able to mark Armed Forces Day as we had planned but it is still important that we acknowledge the amazing contribution made by those currently serving and by those who have served in the past.

“Most recently that contribution has meant playing a vital role in the huge national response to the COVID-19 pandemic, supporting the NHS in so many ways. This combined effort has included reservists from a number of units based in the borough, and as is always the case, the military has risen to the challenge before it.

“We owe our armed forces an enormous debt of gratitude and I would like to express my profound thanks on behalf of the borough.”