A centuries-old statue that towers over visitors in Friary Park has been removed by Barnet Council for two months of works to restore it to its original state. 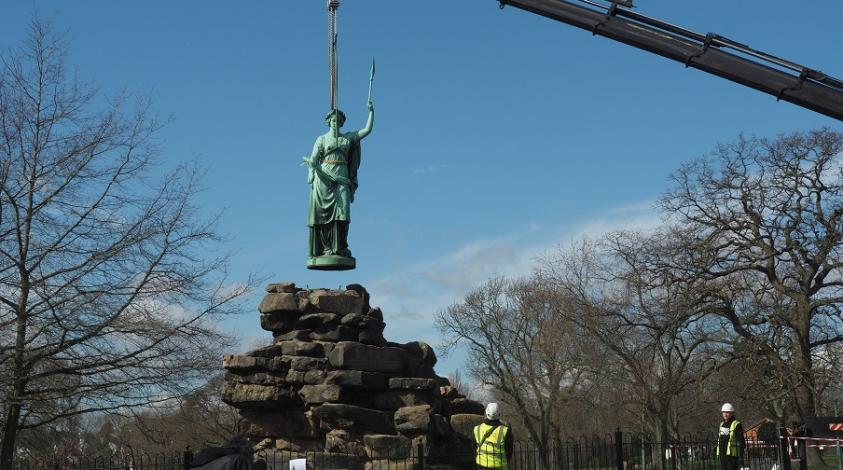 The 11-foot bronze Grade II listed ‘Peace’ statue – which stands on top of 200 tonnes of Devon granite – was first installed in the beauty spot in March 1911.

It had been donated by wealthy benefactor Sydney Simmons, who paid for the purchase of the Friary Estate, on the condition that it forever remain a public park.

Councillor Stephen Sowerby, Barnet Council’s Design and Heritage Champion, said: “I am proud to have secured funding to make this restoration possible. We are committed to a programme of maintenance of all our statutory listed monuments – including war memorials and sites such as this.

“This statue is an important part of our history. We want everyone to be able to enjoy it in its original state. What’s really interesting about this statue is that it stood in our little suburban park for more than a century without anyone realising it was of Queen Victoria.  I would like to thank the Friern Barnet & District Local History Society for discovering its true origins. I can’t wait to see what it originally looked like.”

The popular park first opened in 1910, but the origins of its centrepiece Peace sculpture remained a mystery until a discovery by local historian Nick McKie three years ago.

Mr McKie, Treasurer of the Friern Barnet & District Local History Society, said: “My research began with the aggravating mystery of how ‘Peace’ came to our park without ceremony.

“Something like 10 years later and after much midnight oil we know her in intimate detail. Apart from today’s workaday spear in place of her original dove-topped sceptre, this is the 42-year-old Queen Victoria.”

Mr McKie found that the statue, in fact, dates back to 1861. It was made as a memorial to the Great Exhibition by renowned sculptor Joseph Durham, to be displayed in South Kensington as part of the 1862 International Exhibition. However, the showpiece of the event was changed to a statue of Prince Albert after his sudden death in December 1861. The Peace statue then stood on its own in the neighbouring Royal Horticultural Society Gardens until they closed in 1881.

It is not known what happened to the statue between 1881 and 1911, or how it ended up in the hands of Sydney Simmons.

Mr McKie said: “Where she was in-between remains a stubborn mystery. I live in hope that interest in her present restoration will jog a memory somewhere.”

It is known that Mr Simmons donated the statue to Friary Park in memory of Queen Victoria’s son, King Edward VII, who died on 6 May 1910. The king’s death was just a day before the park opened.

His Majesty had been known as “The Peacemaker” after establishing good relations between Britain and Europe, which included helping to establish the Entente Cordiale with France in 1904. Mr McKie’s extensive research, however, revealed in 2019 that the statue had originally been designed as ‘Queen Victoria as Peace’, following an open competition for sculptors.

What’s more, the statue originally held a rod of equity and mercy – on which a dove, symbolising peace, perched. Since then, the rod has been replaced with a spear, which is now broken. It is thought that the spear represents ‘armed peace’. Barnet Council’s restoration works will see the statue restored to include the installation of the dove, subject to planning permission.