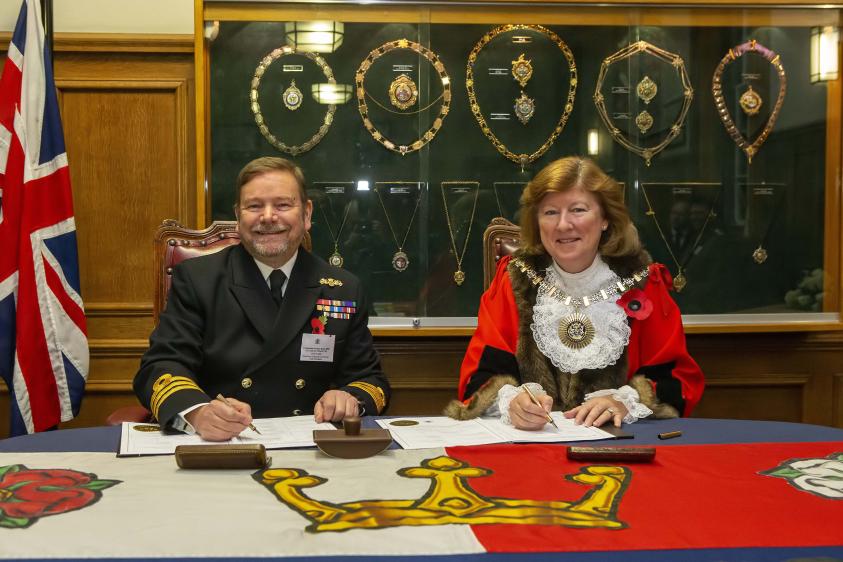 Ahead of Armistice Day (Thursday 11 November) and Remembrance Sunday (14 November) Barnet held an event this week to honour the renewing of the Armed Forces Covenant in Barnet.

16 signatories from the Council, Armed Forces, Reserve Forces and Cadets Association, veterans, and representatives from the health, education, employment, housing, faith and voluntary sectors and the emergency services took part in the signing ceremony. The Hendon Town Hall event was followed by an Armed Forces reception for 80 guests.

The Mayor of Barnet, Councillor Alison Cornelius, paid tribute to people from the Armed Forces from the past and present, highlighting the fact that there is a growing number of Armed Forces Veterans in our community who have been in more recent conflicts who need our support.

The Mayor said: “When we were made aware of the renewing the covenant in the Capital Project, we decided this was a great opportunity for development, to create more awareness of our Armed Forces, to provide training on a learning platform and recognise that departmental and organisational changes may have impacted the continuity.

“There is a perception that Armed Forces veterans are people who are of a certain age and fought in conflicts long ago, but, veterans are also people who have left the forces more recently, some may have been in conflicts, their families have been possibly displaced, school places may be needed. So by committing to this covenant, we are also raising awareness of the difficulties that some members of the Armed Forces Community face and recognise that they will be treated fairly, without disadvantage, in relevant service area considerations and policies and ensure they are included without prejudice.

“There is a significant Armed Forces presence in Barnet who live and work in the borough. With three Army reserve units, 11 cadet units and approx. 9000 veterans, which is the highest in the London area, 27 service pupils and 342 receiving war pensions.

“By re-signing the covenant we, the council, and our partners representing, health, education, housing, employment, voluntary, multi faith and the emergency services, are reaffirming our support and agreeing to collaborate in order to honour the Armed Forces Covenant.

“We are committed to support the Armed Forces Community by helping them access the support that is available to them from the Ministry of Defence, statutory providers and the charitable and voluntary sector. In doing so, we strengthen the relationship and links with the armed forces Community who can bring a variety of transferrable skills and qualities which they have developed during their military careers.”