The Deputy Mayor of Barnet has marked the 550th anniversary of the Battle of Barnet by laying a wreath at the foot of a recently refurbished monument, Hadley Highstone, commemorating the conflict. 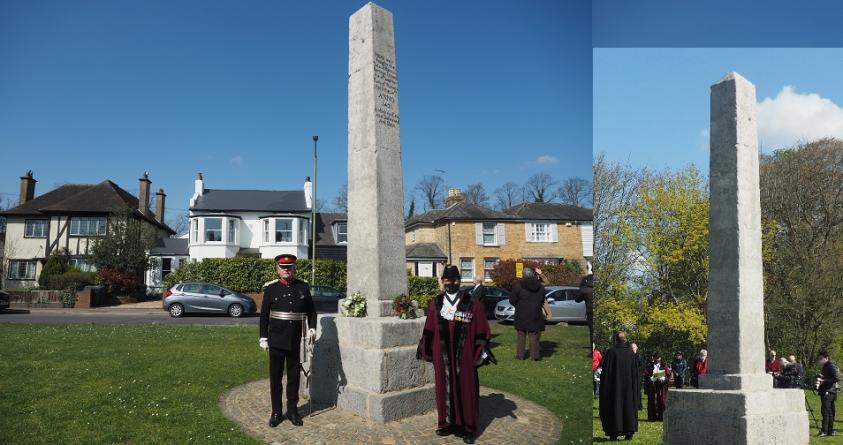 Hadley Highstone is a Grade II-listed plinth-mounted stone obelisk, located at the junction of Kitts End Road and the A1000 in Chipping Barnet, and dates back to 1740. Barnet Council’s recent cleaning and conservation works helped return the structure to its original state ahead of the ceremony to mark the battle, fought on 14 April 1471. The surrounding area is protected as London’s only registered battlefield site.

The Deputy Mayor of Barnet, Cllr Lachhya Bahadur Gurung, said: “I’m glad that we were able to mark the borough’s important role in English history at Hadley Highstone. I would like to pay tribute to all those who lost their lives in this conflict. We remember them all, 550 years on.”

The Battle of Barnet was fought at dawn on Easter Sunday, 1471, as thick fog enveloped the battlefield, making it hard for combatants to see beyond their own hands.

It was fought between rival factions seeking control of the throne of England: the House of Lancaster supported King Henry VI, and the House of York wanted to restore King Edward IV. A ‘friendly fire’ incident, where the Lancastrian troops attacked each other by mistake, sealed the Yorkist victory in the battle. The Lancastrian commander, the Earl of Warwick, was killed attempting to flee.

Three kings were in Barnet that day: Edward IV, his younger brother – the future Richard III – and his prisoner, Henry VI. The conflict was one of many that made up the Wars of the Roses, which ran from 1455 to 1487. It was eventually won by the Lancastrian claimant Henry Tudor, after King Richard III was killed in the Battle of Bosworth in 1485. The new dynasty married the Yorkist symbol of the white rose with a red rose representing the Lancastrian to create the Tudor rose. Both roses now appear on the Coat of Arms of the London Borough of Barnet.

Paul Baker, City of London Tour Guide, said: “The Battle of Barnet is one of the most important battles of English history. There were effectively two kings on the throne of England at the same time, and in medieval England, that was unthinkable. It would be like having two Gods. You could only have one God, and you could only have one King of England. Both had unimpeachable claims to the throne, legally and legitimately descended from their joint ancestor, King Edward III.

“The soldiers on both sides thought they were doing God’s holy work, and that God would smile down on their murderous labours, even though they were fighting on Easter Sunday.”

Two wreaths – representing the rival houses – were laid at the monument during a socially distanced ceremony. Although the current COVID-19 restrictions limited the number of people able to attend on Wednesday 14 April, 2021, local people and visitors to Barnet are able to enjoy the splendid heraldic banners painted by volunteers at Barnet Museum that are on display in the High Street and in the Spires shopping centre.

To learn more about the Battle of Barnet, and what is being organised to mark its 550th anniversary as COVID-19 restrictions are lifted, visit: barnetmuseum.co.uk and barnetmedievalfestival.org.