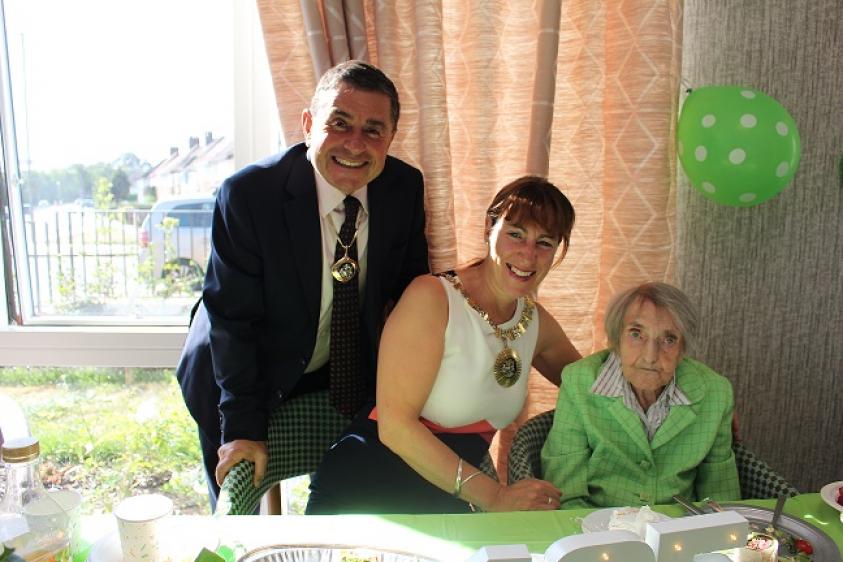 The family and friends of Rebecca Kaufman were joined by the Worshipful Mayor of Barnet, Councillor Caroline Stock, for a big party to mark the occasion.

The new Ansell Court development – now home to Ms Kaufman – contains 53 apartments for the elderly, people suffering from dementia and those with extra care and support needs. The complex – based on the corner of corner of Pursley Road and Milespit Hill, Mill Hill – opened for the first time earlier this year. Ansell Court, built by contractors Rydon, is managed on behalf of the council by Your Choice Barnet.

Ms Kaufman was born in 1914 – five years before the passing of the legislation that allowed some of the nation’s first council homes to be built in the borough.

London County Council built over 89,000 homes between the wars after the Addison Act received royal assent in July 1919, providing government subsidies for local authorities to build houses. More than half of them were built in out-of-county ‘cottage suburbs’. The 4,000-home development Watling Estate in Burnt Oak, then in the urban district of Hendon, was the third largest of these (after Becontree and St Helier). It was built on what was previously Goldbeaters Farm as part of London County Council’s drive to build ‘Homes fit for Heroes’.

The work paved the way for a series of developments to provide places to live for a growing population. In modern times, as the borough’s population ages, Barnet Council has committed to building three extra care developments – the first of which to be finished was Ansell Court.

To follow, Stag House in Burnt Oak will provide 50 new homes and Cheshir House in Hendon will provide 75 new homes. These, too, will be tailored specifically for the elderly and those with extra care and support needs. The three developments will help residents of the borough live happily and stay independent for longer.

The Worshipful Mayor of Barnet, Councillor Caroline Stock, said: “I feel very lucky to meet such a long-living resident on my first trip to Ansell Court. Ansell Court is a fantastic scheme that helps our older residents live an independent life for longer. Rebecca is amazing!”