The owners of a former industrial site in Edgware now blighted by tonnes of fly-tipped rubbish have been prosecuted and fined after failing to heed council warnings that it must be cleared. 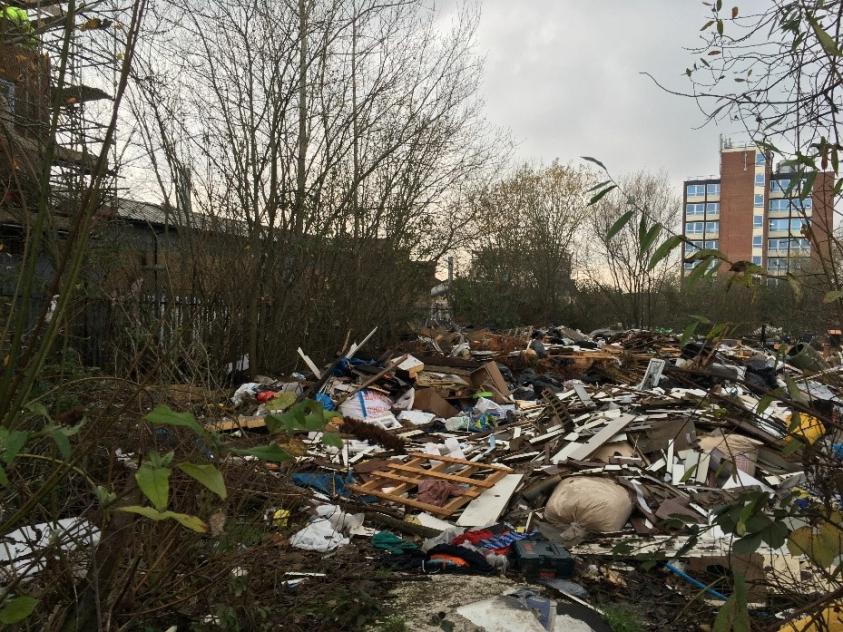 Milegate Limited, and one of its company directors, were fined and ordered to pay costs totalling almost £8,000 at Willesden Magistrates’ Court on 11 February 2020 after ignoring an ‘Untidy Land Notice’ issued by the council’s Planning Enforcement Team requiring that the land behind the former Railway Hotel public house be cleared.

The owners pleaded guilty to failing to comply after the council’s Planning Enforcement Team, working with the authority’s Community Safety Team and the police, issued the enforcement notice in December 2018.

The court heard that despite repeated warnings Milegate Ltd failed to take action or sufficiently secure the site from further fly-tipping, leaving the council no option but to launch legal proceedings.

The company and one its directors, David Nourani, pleaded guilty and were fined £900 and £666 respectively. They were also ordered to pay costs of £3,154 each and a victim surcharge of £90 and £66 respectively.

In December last year Milegate Ltd, which also owns the nearby former Railway Hotel, was also prosecuted by the council and fined £2,000 after being found guilty of failing to rebuild a boundary wall in keeping with the Grade II Listed status of the building.

In recent years, Barnet Council’s Planning Enforcement Team, which has a strong track record of successful prosecutions, has been working to tackle a range of enforcement issues with the unoccupied building, such as unacceptable degradation of the historic character of the building and inappropriate uses of the surrounding site.

Councillor Shimon Ryde, Chairman of Barnet Council’s Planning Committee, said: “Our Planning Enforcement Team has repeatedly tried to encourage the owners of this land to clear it of rubbish as it has become a real eyesore, and is totally unacceptable.

“The owners have ignored attempts to encourage them to act, and we have been left with no other option than to bring the matter before the courts which resulted in fines and the award of costs.

“The team has also been working extremely hard in recent years to tackle a range of enforcement issues with the nearby Railway Hotel and to do as much as possible to safeguard its character.

“Barnet’s enforcement team is the most active in the country and I hope this prosecution sends out the very clear message that we will not hesitate to take action against landowners and developers who act unlawfully.”

More information on the work of the Planning Enforcement Team, and details of how to report a breach of planning control, can be found online.