Staff at Barnet Council’s Civic Office have won two national awards for their response to the national crisis of 2020, and how they plan to move forward after it. 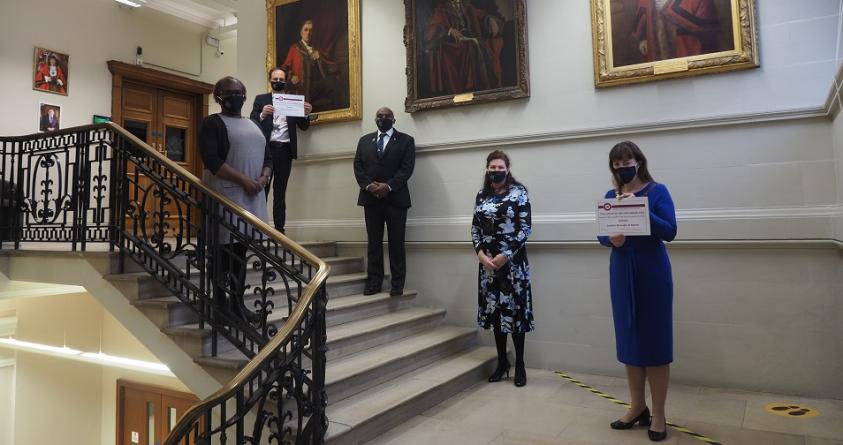 The team is made up of Angela Richardson, Mayoral Services and Civic Events Manager, Tim Kellman, Senior Mayor’s Support Officer, and Valerie Davis, Mayor’s Administrative Assistant. They were given the accolades – and £1,000 in prize money, which will help support the Mayor’s charity, the Royal Free Charity – by the National Association of Civic Officers.

The trio are responsible for managing and maintaining the civic calendars of the Worshipful Mayor of Barnet, Cllr Caroline Stock, and Deputy Mayor, Cllr Lachhya Bahadur Gurung. This includes organising the annual Civic Awards for Barnet’s community heroes, and planning community events and commemorative ceremonies to mark occasions such as Remembrance Sunday and Holocaust Memorial Day.

Their efforts have helped hold the borough together during the pandemic – even as public events had to be conducted in a very different way. By working with the council’s Public Health team, they were able to ensure that all communities could find a voice in the first citizen of the borough. This has included ensuring that Mayoral visits are Covid Secure, when they are able to go ahead, and providing recorded messages – including health warnings – during periods of lockdown.

That’s on top of being part-redeployed during the pandemic to other roles within the council to help tackle the Public Health crisis caused by the rapid spread of COVID-19. Tim Kellman, who usually acts as the Mayor’s chauffeur, began delivering oxygen saturation monitoring devices, allowing GPs to monitor COVID-19 symptomatic patients remotely, preventing the spread of the disease. He is now up for a national award as part of the Barnet SATS (short for ‘saturation’) Probe Delivery team.

The Worshipful Mayor of Barnet, Councillor Caroline Stock, said: “I’m extremely proud of the Mayoral team – Angela, Valerie and Tim – for winning this award. It means a huge amount to all of us. It’s been a very, very difficult year. From the beginning, we had lots of things cancelled, and had to start looking at things differently. But each time that we’ve taken a decision, it’s been taken with all of us, and I think that’s very special.”

Angela Richardson, Mayoral Services and Civic Events Manager, said: “I am absolutely thrilled for our team to have been given these awards. The Mayoral platform is a huge asset to any local council, which has been received extremely well by our voluntary organisations, faith groups, partners, stakeholders and indeed our residents. Going forward we have seen we can overcome any difficulties that come our way.”

John Hooton, Chief Executive of Barnet Council, said: “The Mayor and Civic Office team have done a fantastic job and they thoroughly deserve these awards. They have worked incredibly hard. It’s been such a difficult year, but they’ve gone above and beyond to support Barnet in any way they can throughout this time.”