The first sections of Silkstream Park and Montrose Playing Fields have been opened as Barnet Council’s £5million upgrade of the two green spaces nears completion. 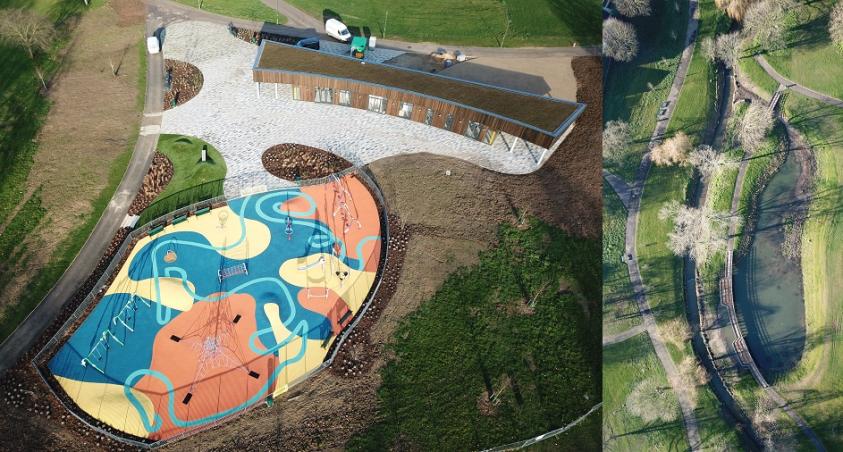 The upgrade to the two parks is nearing completion.

The upgrade is being funded primarily from developer contributions to infrastructure in the borough. Other cash injections have included £324,000 from the Mayor of London’s Green Capital grant, nearly £80,000 from the Environment Agency Water Environment Improvement Fund, and £113,000 from the London Marathon Trust.

A string of new facilities in the two parks – situated between Colindale and Burnt Oak – will provide enjoyment for all ages by the time work is finished.

Councillor Dan Thomas, Leader of Barnet Council, said: “We’re delighted to have reached this milestone, which represents a significant step in the transformation of the area. This project shows how all our residents can benefit from growth and regeneration.

“We want these parks to be fun and family-friendly places that can be enjoyed by the whole community. The new Silkstream and Montrose will bring people together in a safe and shared space. We hope that they will be enjoyed by everyone.”

An ‘Active Zone’ in Montrose Playing Fields, next to Unitas Youth Zone, will feature two tennis courts, table tennis tables, parkour area, basketball court and outdoor gym. A skate park has been installed nearby, ready to be opened as soon as nearby landscaping works are finished.

There will be a new café called The Hub, as well as changing rooms, public toilets and a multi-use studio for children’s parties, mother-and-toddler groups and other events. What’s more, there will be two new playgrounds – the first of which, in Silkstream Park, has now opened to the public. Its facilities – for youngsters aged 3-15 – include a climbing frame, slide, seesaw, swings, roundabout and more.

Residents will also be able to find new litter bins, benches, pathways and landscaping in the reopened parts of the parks. Various biodiversity improvements are being made to the two parks, including the development of a fruit tree orchard.

A new wetland area – which looks a bit like a pond – has been created in Silkstream Park. The area will fill with water whenever the Silk Stream Brook bursts its banks, reducing the risk of flooding to nearby properties during heavy rain. A bridge across the wetland area will allow residents to get closer to the birds and other wildlife that it attracts.