A special ceremony held at Hendon Town Hall on Wednesday 25th April recognised the efforts of 22 people for their hard work and dedication to their community. 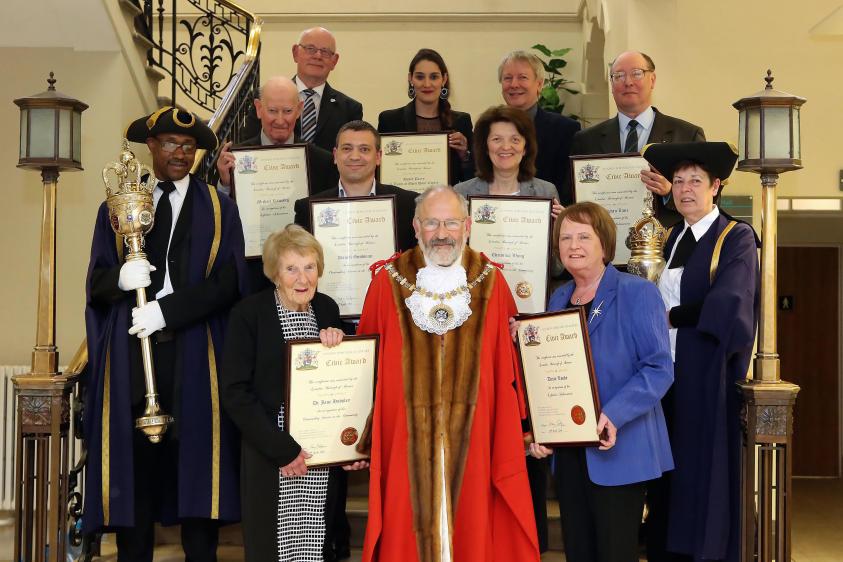 7 Civic Award framed vellums were given for Lifetime Achievement and Outstanding Service to the Community. 15 other nominees were presented with a certificate scroll in recognition of their achievements.

The Worshipful the Mayor of Barnet, Councillor Brian Salinger said:

“These awards celebrate the hard work and contribution these individuals have made to their community in Barnet. It is enriching to live in a borough which contains such selfless and motivated individuals who work endlessly to make Barnet a better place for others.”

The Civic Award winners for Lifetime Achievement are:

Stephen Lane who was recognised for his work as a Governor at Ravenscroft School (now Totteridge Academy) for 30 years and has supported many local charities. He has been an Elder at the Barnet United Reformed Church for 35 years, he currently holds the position as the President of the St John Ambulance- Barnet detachment. Stephen has also been involved in several organisations including the Boys Brigade, recently retiring after 44 years, and the Royal Army Service Corps and Royal Corps of Transport Barnet and is a member of the Barnet War Memorials Association. Stephen has also served as Aide-de-Camp (personal aide) to several Representative Deputy Lieutenants of the London Borough of Barnet going back to the 1970’s.

Dixie Locke was a much-loved Head Mistress at St. Andrews School, Totteridge, retiring after 31 years at the school. As well as a lynchpin of St. Andrew’s Church, Dixie has been involved in many charities over the years including Cancer Research and acting as secretary of the Totteridge branch of the NSPCC. Dixie has also been a regular member of the Totteridge Conservation Area Advisory Committee

Michael Rawling has been the secretary of the Mill Hill Music Club since its foundation in 1955 and has given his service to Barnet Borough Arts Council, Barnet Christmas Fayre Committee. He has been the single organiser of the annual Royal British Legion Poppy appeal in Mill Hill for many years where he spends several days selling poppies in all weathers, even raising over £5,000 in 2017.

The Civic Award Winners for Outstanding Service to the Community are:

Daniel Goodman who has rendered outstanding service to the residents of Edgware both in his capacity as Chair of the Edgware Ward Panel and in his role as Chair of the Stonegrove Community Trust.

Dr.Jane Hobsley has been a Trustee of Baxendale Care Home, an active member of the Women’s Institute, Totteridge branch of which she has been President many times. She has also taken post as house surgeon at Great Ormond Street Children’s Hospital.

David Parry & Team at Open Door Centre have helped restore and renovate the old schoolhouse next to Christ Church St Albans for community use and a resource centre for the growing senior population of Barnet. Since a £1million refit in May 2017 they have been visited by 5000 members.

Christina Wong has led the bid from the newly formed NW7 Hub to win the contract to operate the library in Mill Hill in partnership with Barnet Council and developing other programmes for the benefit of the local community and is a key member of the team who are striving to build a new distinctive community centre.