The Worshipful Mayor of Barnet commended the hard work and dedication of some of the borough’s most community-minded citizens during a special ceremony at Hendon Town Hall. 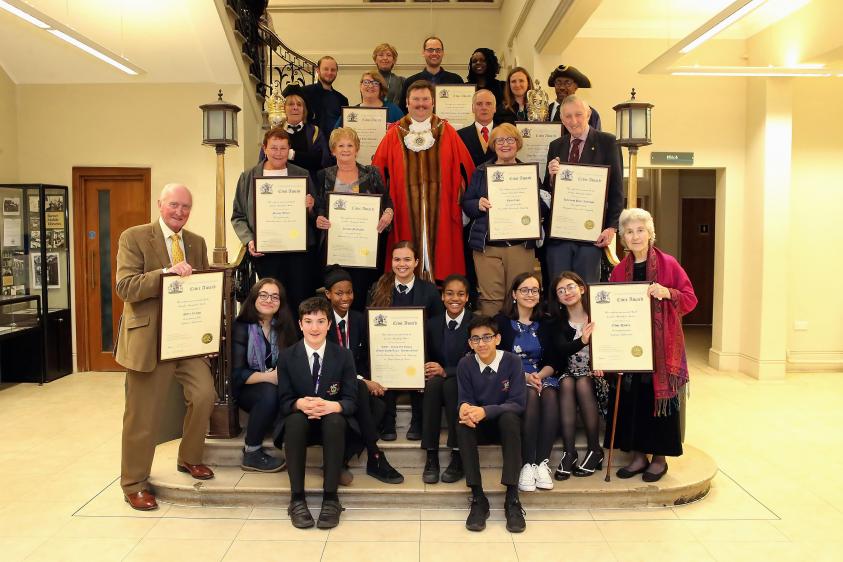 They were given Civic Awards across a range of categories during the event on Wednesday 3 April after being nominated by the public for the good work that they have done.

The Worshipful Mayor of Barnet, Councillor Reuben Thompstone, said: “These awards celebrate the contribution that these wonderful people have made to their community. It is enriching to live in a borough that contains such selfless and motivated citizens, who work endlessly to make Barnet a better place for others.”

The winners were presented with framed vellums, while 11 runners-up received certificates.

The winners of the Lifetime Achievement Civic Award were:

Peter was recognised for many years of community work across multiple organisations, including Victim Support, Friern Barnet Voluntary Care for the Elderly and Age Concern Barnet.

Olive has served lunch for two days a week for Homeless Action at their North Finchley premises for the last 14 years. She also works for Street Pastors and Rail Pastors, helping people in times of crisis, and even fosters pets for people who are in hospital through The Cinnamon Trust.

John was recognised for his dedication to the Finchley Sea Cadets since the young age of 11, recently helping them restore their unit in Finchley Central’s Long Lane.

The winners of the Outstanding Service to the Community Civic Award were:

Rosa has volunteered for 17 years at the Royal Free Hospital, for four years at Barnet Hospital and previously volunteered for nine years at Colindale Police Station. Rev Peter was recognised for his 50 years of preaching at Christ Church, Whetstone. Jocelyn was praised for her volunteering at East Barnet Library and South Friern Library, where she runs weekly Baby Rhyme Time and Toddler Read & Rhyme sessions.

Rev Helen’s good deeds include helping run a foodbank, and helping organise a rest centre after a fire that led to 60 residents being evacuated from the Grange Estate. Maxine helps maintain her local churchyard and finds homes for abandoned pets through Cats Protection – just two of her roles in more than 50 years of volunteering. The Clitterhouse Farm Project, meanwhile, is credited with securing a positive focal point for the community – with a volunteer-run café and plans for three affordable workshops for creative professionals.

The winners of the Young Citizens Civic Award were:

The team’s achievements include securing £10,000 to train Mental Health First Aiders for every school in Barnet and collectively completing more than 3,000 hours of volunteering in a year.