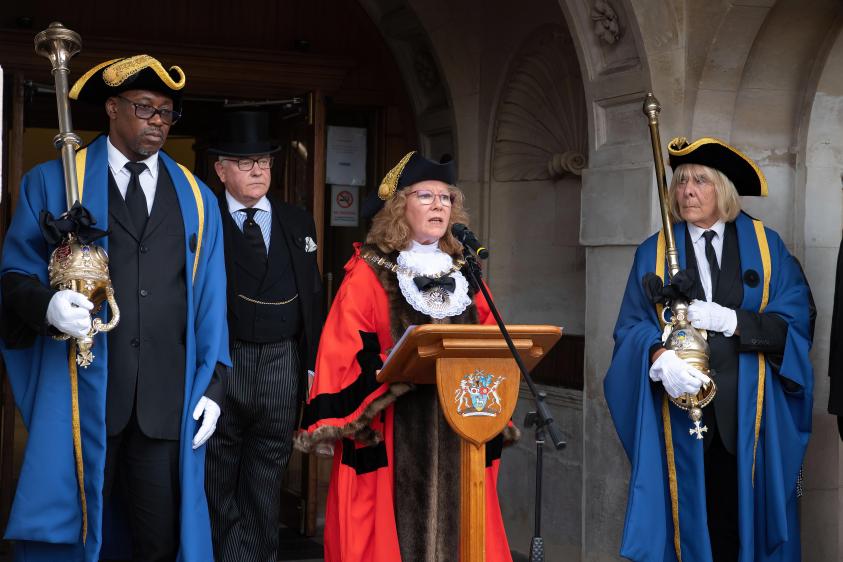 The Worshipful Mayor of Barnet, Cllr Alison Moore Proclaims His Majesty The King

The Worshipful Mayor of Barnet, Cllr Alison Moore, today (11 September) proclaimed His Majesty The King in the borough of Barnet.

The Proclamation took place at 2pm at Hendon Town Hall. The Mayor was joined by the Representative Deputy Lieutenant Martin Russell, Barnet Council Leader Cllr Barry Rawlings, councillors, past mayors, and the council’s leadership team. The ceremony was also attended by Barnet residents.

Tributes were paid to Her Majesty Queen Elizabeth II, with the Mayor joining members of the public and councillors by laying flowers in front of Hendon Town Hall.

A book of condolence is open at Hendon Town Hall so that people can pay their respects. This will be open from 9am to 5pm, Monday to Friday and will remain open until 5pm the day after the funeral.

As well as the book of condolence available at the Town Hall there is an e-condolence book if people wish to sign they can visit https://www.royal.uk/External link