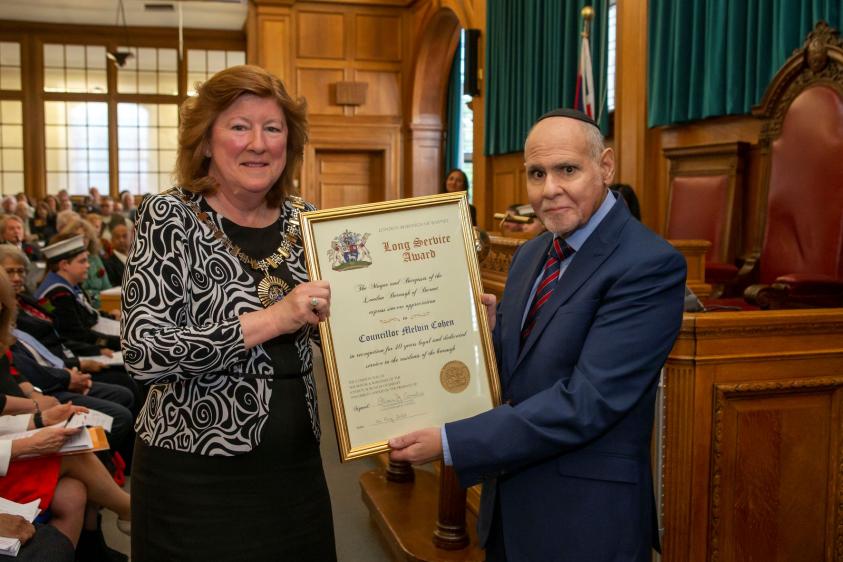 Councillor Cohen receiving his award for 40 years of service

Councillor Melvin Cohen was honoured for his 40 years of service to the Borough of Barnet at the Annual General Meeting of the Council at Hendon Town Hall, Tuesday 24 May.

He was awarded a certificate by the outgoing Mayor, Councillor Alison Cornelius.

Elected to represent the Golders Green ward in 1982, he has been doing so continuously during four decades of public service, memorably serving as Mayor in 2003/4 and again in 2013/14.

Councillor Cohen said: “Things have changed so much in 40 years. I preceded the age of technology and I guess I have been left a little behind, but I have enjoyed my time on this Council over the years and I am really looking forward to the next 4 years serving my constituents in Golders Green and the inhabitants of this illustrious Borough in general.”

Outgoing Mayor, Councillor Alison Cornelius, who presented a ‘Long Service Award’ certificate to Councillor Melvin Cohen, said: “I have great pleasure in presenting this award on behalf of the Mayor and Burgesses of the London Borough of Barnet in recognition of 40 years loyal and dedicated service to the residents of the Borough. This is a truly incredible and remarkable achievement.

During his 40 years as a Barnet Councillor, he has served as Mayor twice and raised significant amounts of money for his Mayoral Charity Appeals. I have known Cllr Melvin Cohen since I joined the Council in 2009 and it has been a pleasure getting to know and work alongside him. Together with all Barnet Councillors, I wish him well as he continues to serve the Borough and Community he loves.”

Barnet Council Leader, Councillor Barry Rawlings, said: “Forty years’ service to your borough is truly commendable and despite sitting on the other side of the aisle from Councillor Cohen I’ve always found him to be a hugely respectful and hardworking councillor. He has worked diligently for his community and continues to do so, four decades is quite an astonishing feat and I’m glad I can be here to congratulate him.”

Councillor Daniel Thomas, Leader of the Barnet Conservative Group also gave thanks to Cllr Cohen: “I have worked with Melvin for many years now and have been fortunate to have been able to learn from his depth of knowledge and experience. His dedication to his community and the borough is an inspiration and I know I can speak for all our colleagues in saying thank you and congratulations on 40 years of service to Barnet.”

Councillor Cohen has lived in Barnet for most of his life and was educated at Wessex Gardens Primary School and Hasmonean Grammar school before attending University College London. He served as Cabinet Member for Planning from 2004 to 2010 and has also been the Chairman of the Constitution & General Purposes Committee. He has two sons one of whom, Councillor Dean Cohen, is also a councillor in Golders Green.