Mural honours ‘Queen of the Air’

The extraordinary life of the first woman to fly solo from Britain to Australia has been honoured with a striking mural in Cricklewood. 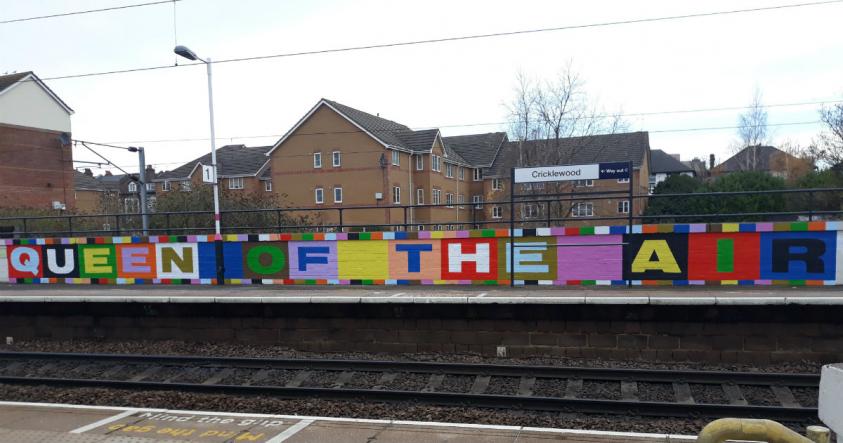 image of the queen of the air mural

The brightly coloured mural, which now adorns the platform of Cricklewood Station, pays tribute to pioneering aviator Amy Johnson who lived in Cricklewood and set a series of daring long-distance flying records during the 1930s.

The artwork, on what was once a whitewashed wall, has been created by internationally renowned street artist Lakwena Maciver using Amy Johnson’s nickname from the time – ‘Queen of the Skies’. The project is part of a London-wide trail to mark the centenary of women’s suffrage.

The mural is part of a series of free public artworks celebrating unsung women heroes from across London which has been curated by the Tate Collective.

Lakwena Maciver is a globally recognised street artist whose signature style uses colourful type. She recently completed a mural at the Southbank and has worked in cities from Miami to London.

The artwork was made possible thanks to collaboration between the Cricklewood Town Team, Govia Thameslink Railways, Barnet Council, Brent Council and the GLA.

Born in 1903, Amy Johnson moved to London from Hull and lived at Vernon Court, Hendon Way. Her Cricklewood home was marked with a blue plaque by English Heritage in 1987.

Gaining her pilot’s licence in 1929, Johnson became a regular visitor to Stag Lane Aerodrome in Edgware.

In 1930 she piloted her second-hand Gipsy Moth biplane, ‘Jason’, 11,000 miles solo from Britain to Australia, earning her international renown.

She tragically lost her life in 1941 after having to bail out of a Royal Air Force Airspeed Oxford which she had been tasked with delivering to RAF Kidlington, near Oxford.

Danny Maher, Chair of the Cricklewood Town Team, said: “We are delighted to see Amy Johnson landing in Cricklewood in the guise of a colourful and powerful mural created by artist Lakwena. The Queen of the Air is an inspiration to us all.”

Deputy Leader of Barnet Council and Chairman of the Assets, Regeneration and Growth Committee, Daniel Thomas, said: “This is a fantastic project which highlights a fascinating period of Cricklewood’s local history and its many links with aviation. Amy Johnson was a pioneer in the truest sense of the word and lived an extraordinary life.

“It is great that this mural highlights her amazing life and it is a really vibrant and welcome addition to the area.”

Councillor Shama Tatler, Brent Council’s Cabinet Member for Regeneration, Highways & Planning, said: “It’s great that we have been able to come together to make this mural possible and to celebrate the life of an unsung hero and pioneer aviator.  Amy Johnson contributed greatly to this country and her bravery is noted in history and now in this colourful mural.”

For more information on the life of Amy Johnson visit the Amy Johnson Arts Trust website.