The Worshipful Mayor of Barnet, Councillor Caroline Stock, has issued a statement to mark the 25th anniversary of the Srebrenica genocide. 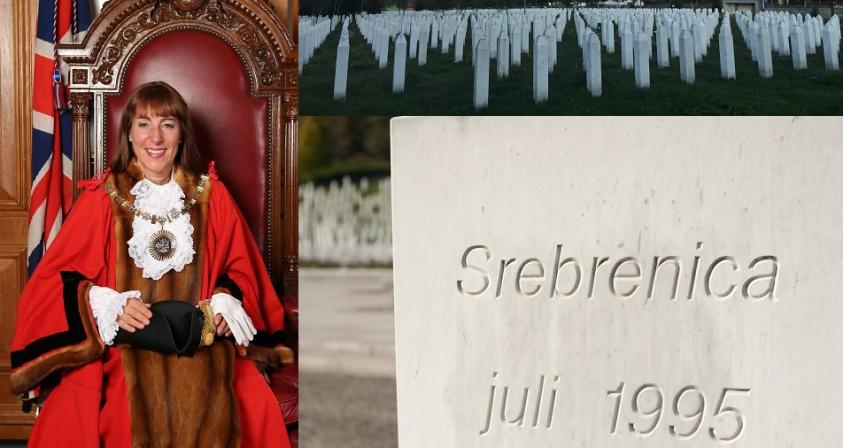 The Worshipful Mayor of Barnet, Councillor Caroline Stock, remembers the 25th anniversary of the Srebrenica genocide

The massacres began on 11 July 1995, when Bosnian Serb forces, led by General Ratko Mladić overran and captured the town of Srebrenica in Eastern Bosnia. It had been declared a UN Safe Area, but in the days following, more than 8,000 Bosnian Muslim men and boys were systematically murdered and buried in mass graves. Srebrenica Memorial Day is now marked each year on 11 July.

The Mayor said: “We should seek to learn lessons from the past and recognise that genocides do not happen on their own. They begin as a result of discrimination, racism and hatred being allowed to take place.

“The testimonies of the Bosnian genocide must be used to educate, to prevent any of these atrocities from ever happening again.

“At the Borough Holocaust Memorial event this year we recognised the 25th anniversary year of the Bosnian genocide and I was very pleased to have a large number of children present at the event and included in the commemoration.

“We recognise that humanity is still scarred by the misconception that some people’s lives are worth less than others because of their disability, ethnicity, gender, religion or sexuality. Racism, anti-Semitism, xenophobia and discrimination still persist and we have a shared responsibility to fight these evils.

“We in Barnet condemn the evils of prejudice, discrimination and racism, and value the right for all to live in a free, tolerant and democratic society.

“Today we mourn the loss of so many and remind ourselves that we have a personal responsibility to recognise and challenge discrimination.”